So You’ve Got “Grandma Knees” 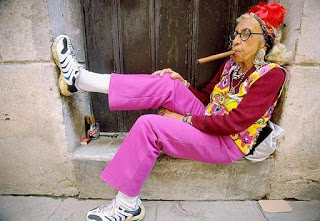 I haven’t laughed as hard in a while as I did when somebody’s sixteen-year-old daughter plunked down next to me at a gathering and dryly announced, “So my mom is making me come over and talk to you because I’ve got grandma knees.” Her opener was a hoot, but I loved her description even more because it was so completely on target and merited instant diagnosis: patellofemoral syndrome, a dramatic term for tracking issues of the patella (aka kneecap). It’s the second most common problem I treat (the first is spinal pain), and “grandma knees” is a perfect name for the syndrome: Creaky, achy, sore knees that may creak and pop, pain that increases with prolonged or repetitive knee bending activities—squatting, prolonged sitting, stairs (usually going downstairs is worse than going up), and of course sports, usually those that involve running. Occasionally the symptoms can be severe enough that pain is felt with walking or at night, swelling can be visible around the patella, and the knee can feel weak. Pain generally is felt somewhere around or behind the patella, although in a very inflamed knee it may be difficult to attribute the pain to one particular location.

Patellofemoral pain is caused by an imbalance in the soft tissue structures surrounding the knee joint. In order for you to envision this, let’s do a quick little review of the knee joint. So you’ve got your femur, or thigh bone meeting your tibia, or shin bone. The patella sits in a little groove at the base of the femur and glides superiorly and inferiorly in the groove. Its purpose is to provide leverage for your quad tendon to extend your tibia, which happens approximately 4,000 times a day on average just with walking, and for more active people, many more times. What is happening when a person experiences patellofemoral pain is that an excessive pull on the lateral aspect of the patella overpowers the medial stabilizing forces, pulling the patella to the lateral edge of the patellar groove. This causes friction between the lateral edge of the patella or the surface underneath the patella and the lateral aspect of the patellar groove. In extreme cases, an excessive lateral pull can pull the patella partially or completely out of the groove, known as a patellar subluxation or dislocation.

The imbalance can come from several sources. The quadriceps muscle, the muscle on top of your thigh which is responsible for extending your leg (i.e. straightening your knee) is comprised of four parts. The ones worth mentioning right now are the vastus medialis obliquus (or “VMO,” as we PTs trendily put it)–the smaller, inner quad muscle just above the inner portion of your patella which works to pull the patella medially–and the vastus lateralis, the powerful outer quad muscle which pulls the kneecap laterally. Frequently due to movement patterns a person has developed, or from not paying quite enough attention to strengthening exercises, or from performing the wrong exercises or performing them incorrectly, the vastus lateralis strength overpowers that of the vastus medialis and pulls it out of alignment. Tight muscles also can contribute. The iliotibial (or “IT”) band is notorious for this. If your quads or hip flexors are tight, the resulting tension in the front of your thigh can make matters worse by compressing the patella into the groove, increasing friction. Tight hamstrings also can create a slight resting bend in your knee, which also increases friction between the patella and its groove.

A diagram may help, and I apologize if the following picture is just too much for you, but oh my gosh, I love it, so I thought I’d share. Just ignore it if it confuses you. This is a diagram of the forces and directions of pull on the patella of a right knee: More women than men are affected by patellofemoral pain, and this is thought to be due to one of the favorite technical terms that PTs love to throw at their clients, the “Q-angle.” If you measure the angle created by the alignment of the femur and the tibia then you have the Q-angle (check out another confusing photo below of a right hip and knee if you care about the Q-angle); in general it is slightly wider in women than men because of the shape of the pelvic bones in women, which are shorter, wider, and flared outward more in women (and please let’s not beat a dead horse with “big butt” jokes here. Please.). The average Q-angle in men is about 12 to 14 degrees, but 15 to 17 degrees in women, and a larger than average Q-angle is thought to be a predisposing factor for patellofemoral pain. But men get it too, and while I have not found a study supporting my observation, what I have noticed over the years in the clinic is that women with patellofemoral pain more frequently exhibit the vastus medialis/lateralis muscle imbalance, while the men tend to have the tight muscles. A wider than average Q-angle, however, does not excuse you from physical activity, because it is just one predisposing factor. Don’t bother showing up and telling me, “I can’t do any strengthening and my knees will never heal because I have a huge Q-angle.” Don’t go there, girlfriend. That Q-angle is one predisposing factor. Frequently a few weeks of stretching and quad strengthening with a focus on retraining that finicky VMO does the trick, occasionally along with some other supportive treatment like ultrasound to boost the circulation to the painful area, electric stimulation to provide biofeedback and aid your VMO awareness, or taping to assist in positioning the patella correctly.

Easy peasy, right? Sometimes it is, but frequently there can be a little more to it. A thorough exam should also look at what is going on above and below the knee, at your hip and ankle. If your hips are tight, your femurs may rest in a slightly interally or externally rotated position, causing your patella to shift in the opposite direction, tensioning the structures on one side and/or causing friction on the opposite side. If one side of your pelvis is rotated, it may cause a functional leg length discrepancy, and you may be pronating or supinating your foot and ankle in response, which can alter the patellar mechanics. Finally, decreased core strength may be putting more stress on your knees because your body’s shock absorption system is not functioning correctly; and if you’ve ever seen someone with poor trunk stability walking, it is an ugly sight—their feet hit the ground like a load of bricks and you can almost see the ground reaction force vibrate up their legs and cause their knees to hyperextend slightly. Yuck! But these are all factors that, once identified, can be addressed within a relatively short amount of time. Strengthening, manual therapy and arch supports all can be very effective.

Most cases do respond to PT, particularly if you follow instructions and do your exercises! And I strongly encourage you to give it your best shot, because the surgical options out there aren’t fun. Some people love the idea of surgery, but I am telling you from what I’ve seen on the rehab side that the clients I have known who have had lateral releases wound up back with me 18 months later when the soft tissue healed and the problem was back. The one or two patellar realignments I’ve seen left clients with miserable bone pain and still slogging away at the same old exercises. I’m sure I will get 20 blog comments from people telling me that I don’t know what I’m talking about, PT didn’t help and they sailed through surgery with neither an ounce of pain nor an ounce of rehab—but I’ve never met those people. Some clients I have known also have opted for cortisone injections, which do not fix the patellar mechanics, of course, but may help a severely inflamed patella by temporarily easing the pain enough for the client to get somewhere with their strengthening.

What makes me alarmed is the surprising number of professionals in the sports, fitness and rehab world who do not have a handle on a problem that is relatively common and quite treatable. I have seen clients who were long distance runners 3 months ago in clinical depression because they were told they would never run again, and that they probably needed a knee replacement; middle and high school athletes who were told either that they would be unable to be active for their entire life because they have serious bone or joint issues—and the young lady who sat down to chat with me was one of these–or conversely accused of malingering to get out of gym or due to an emotional disorder. And I’ve also seen the result of female clients, the victims of huge rehab factories (I had the pleasure of working in one for a year as a new PT, and I am still quite in awe that we were never sued) who were forced to do step ups, lunges and squats through pain until their kneecaps were severely inflamed—their practitioners were on the right track with the quad strengthening, but no one had bothered to look at the other factors contributing to their patellar mechanics. And the unfortunate result for clients who have been led to believe for years that they need to live with the pain is that long term, the continued friction will wear away the protective cartilage on the underside of the patella and in the femoral groove, giving them patellofemoral arthritis.

So if you think you’ve got grandma knees, it may be worth it to try a few weeks of gradual core and knee strengthening along with stretching your hips, quads, hamstrings, iliotibial band, and calves to see if it helps. You have my permission to try some planks, and some squats and lunges, and stepping on and off a step and see what happens, and it would be a good idea to have someone with a little experience watch you to make sure your form looks ok. Please use just your body weight only for resistance when getting started. For God’s sake please do not hit the squat rack right off the bat and start squatting 150. You also could throw a pair of over the counter arch supports in your sneakers without doing yourself any serious damage—just please be sure to put the left arch support in the LEFT shoe and the right arch support in the RIGHT shoe, please? And if you notice no improvement after about 3 weeks or your knee pain seems to be worsening sooner than that, or if you are developing new aches and pains, get yourself ASAP to a doctor or PT for guidance. Don’t delay—the earlier the intervention, the sooner you will get back in your groove!