Recap Of The 30-Day Plank Experience 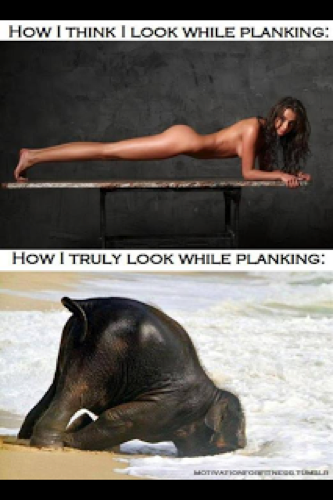 Here in the fast-paced, glitzy world of Points North Physical Therapy, we’ve just wrapped up a 30-day fitness challenge. We started on December 1st with a 30-second plank and followed a calendar of plank intervals to gradually build up our plank time with the goal of completing a 5-minute plank on December 30th, or alternately, a more manageable goal that participants could set for themselves. The main idea was just to do a little more each day, see how far we got, and to get stronger. We had an enthusiastic crowd dive in during the first week of December, but as holiday madness takes over everyone’s lives every year, the group started to taper down the week before Christmas. So far I have heard that five of us completed a 5-minute plank yesterday, and two others set a very admirable personal goal for plank time and succeeded as well. I give everyone credit for giving it a try during the busiest month of the year for most people, and I am extremely proud of everyone who stuck with it!

The plank challenge was a humbling experience! I clearly remember looking at the training calendar and thinking, “Easy peasy, no problem, I rock,” until the second week, when I got an uncomfortable feeling during the first 90-second interval that this was going to be much harder than I thought. I started to get Facebook messages and texts from people who were starting to struggle at this same point as well and realized that people needed a little more instruction. The plank requires you to use your entire core, not just your abdominals. You use your shoulder girdle, glutes, hip flexors and quads to lift your knees and push away the floor. Hanging by your abs alone at 90 seconds becomes torturous.

Redistributing the load throughout the core got us all another few seconds’ worth of decent planking. From then on it was a matter of sticking with the training regimen and trying to hold it together mentally to get through the 30 days. It was interesting to see at what points the difficulty of the challenge increased, and we all seemed to be on the same page. I heard from people who were collapsing to the floor one day, then the next day having a much easier time holding the same interval. 3 1/2 to 4 minutes seemed to be another breaking point. At 3 1/2 minutes I began to doubt my ability to pull off an eventual 5 minute plank, and during the first 4-minute plank I had to go up on my hands to ease the pain. But the next day, the 4 minutes was much easier. Training is an amazing thing.

So we all kept on planking through the holidays, amidst chaos, piles of decorations, gift wrap, gifts, and baffled houseguests. My kids gave it a try. Gabby made it to three minutes, and Natalie completed a 5 1/2 minute plank on hands! The biggest blow to my ego was when my sister Liz took a photo of me doing the 5-minute plank yesterday, and shout out to Joanna Branch for the photo above, because it is dead on. I figured I would look awesome. Instead I sported a case of elephant ass a la the photo. Thanks, Liz! Anyway, here I am, powering through it in the hallway, the only semi-clean room of the house at that point And I think at this point I was singing, very loudly and badly, along to “Royals” to get through the last minute: I hope that everyone keeps doing the plank, because I believe you will see results in your strength, posture and function if you haven’t already. In my own life I have noticed that a hip alignment issue that has been plaguing me since August magically has been improving over the past 10 days despite my blowing off the exercises that I know I should be doing (yeah, I’m not perfect either), and that I have been able to swim faster recently. I attribute this miracle to the fact that I can hold my body in a more streamlined position for longer periods of time thanks to the plank.

Happy new year, everyone! Thanks so much for being a part of the Points North PT journey this year. I am so thankful for all the friendship and support.